Or as I like to call it, “The last of the action heroes”
Let’s talk about the launch of the new Toyota GR Yaris, the fiercest three pot of them all. And detail why the launch itself was as special as the car. And the car is very special indeed, in fact I’d say it’s the very last of the action heroes. But we’ll get to that later, as well as a shotgun ride with none other than Giniel De Villiers. 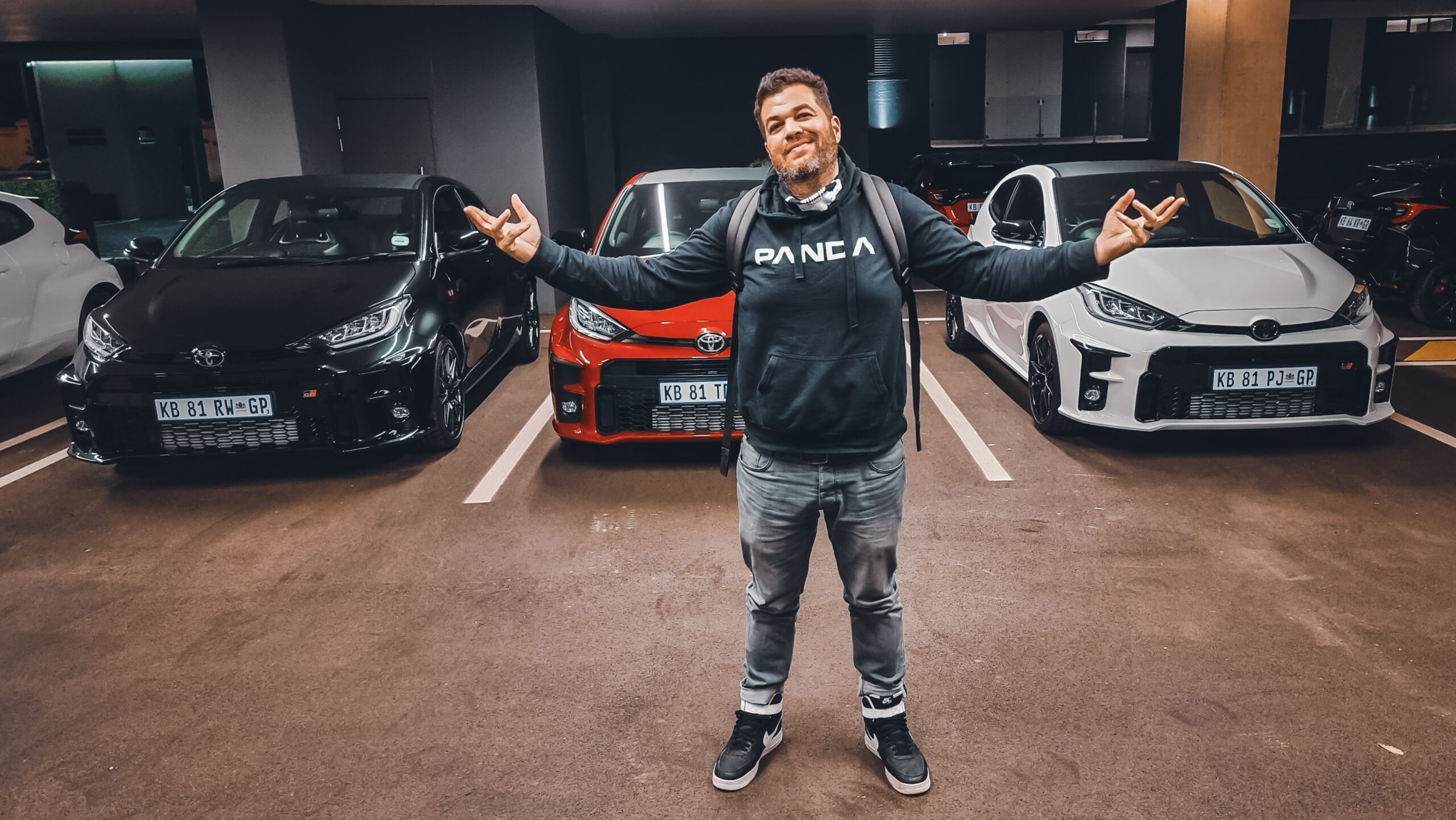 Part 1: Formula K Karting circuit
We were invited to put the new beasty through its paces around the tight kart track to show off that while many hot hatches have been described as exhibiting go-kart-like handling, the GR genuinely does. Yes GR. G is for Gazoo and R is for Racing, the bonkers name for Toyota’s 60-year-old motorsport endeavours. 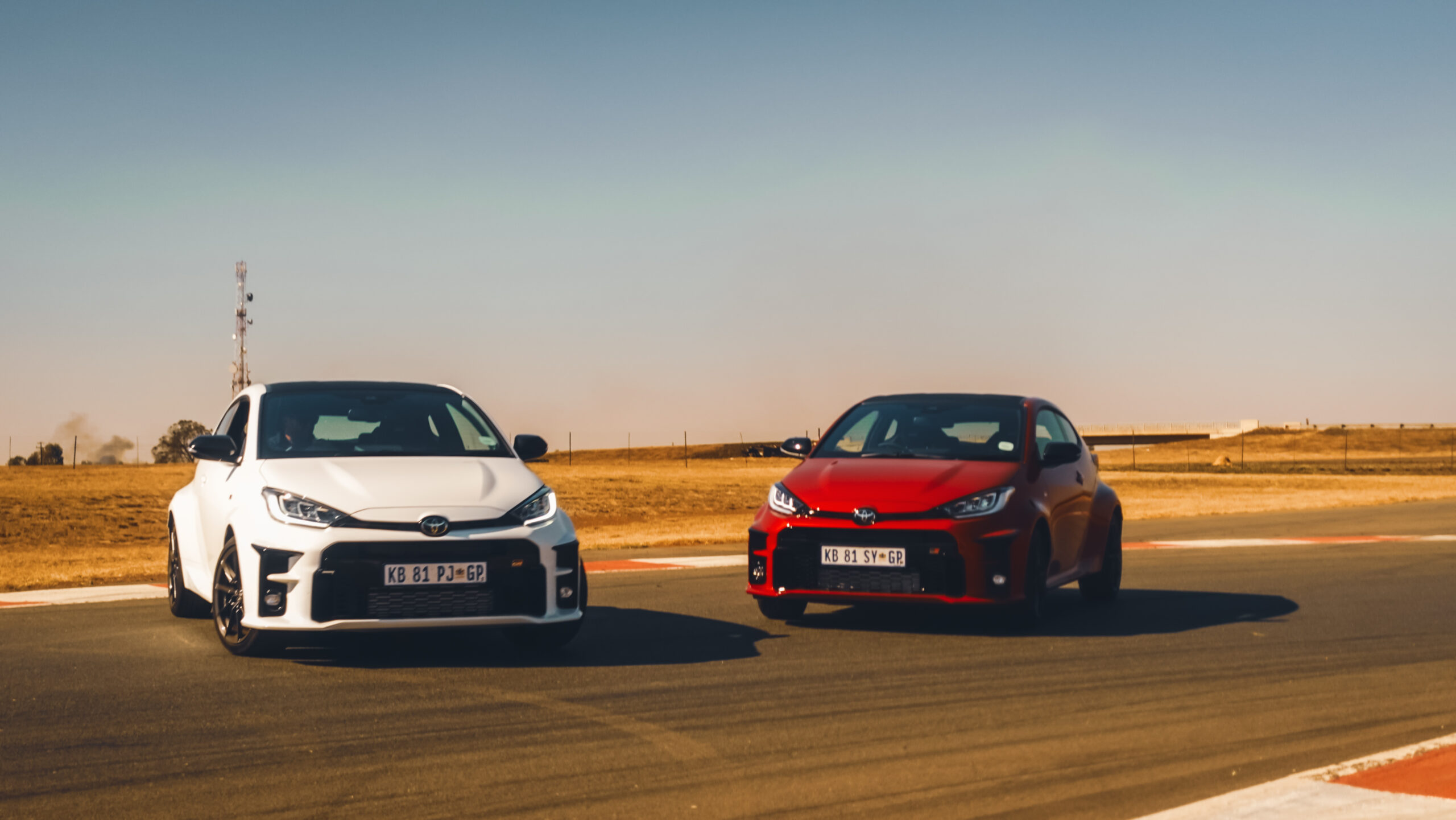 They have a saying there that goes “roads build people and cars.” Because it’s on roads and I’m sure the rally fans would agree, off-roads too, that they’re constantly honing the driving experience. For us. We managed about 10 laps including sighting and cool downs, before I hopped in with touring car racing driver Michael van Rooyen showed me what the car was really capable of in the right hands. Between his display and my careful lapping of the short circuit, well, it revealed loads. Let me begin. 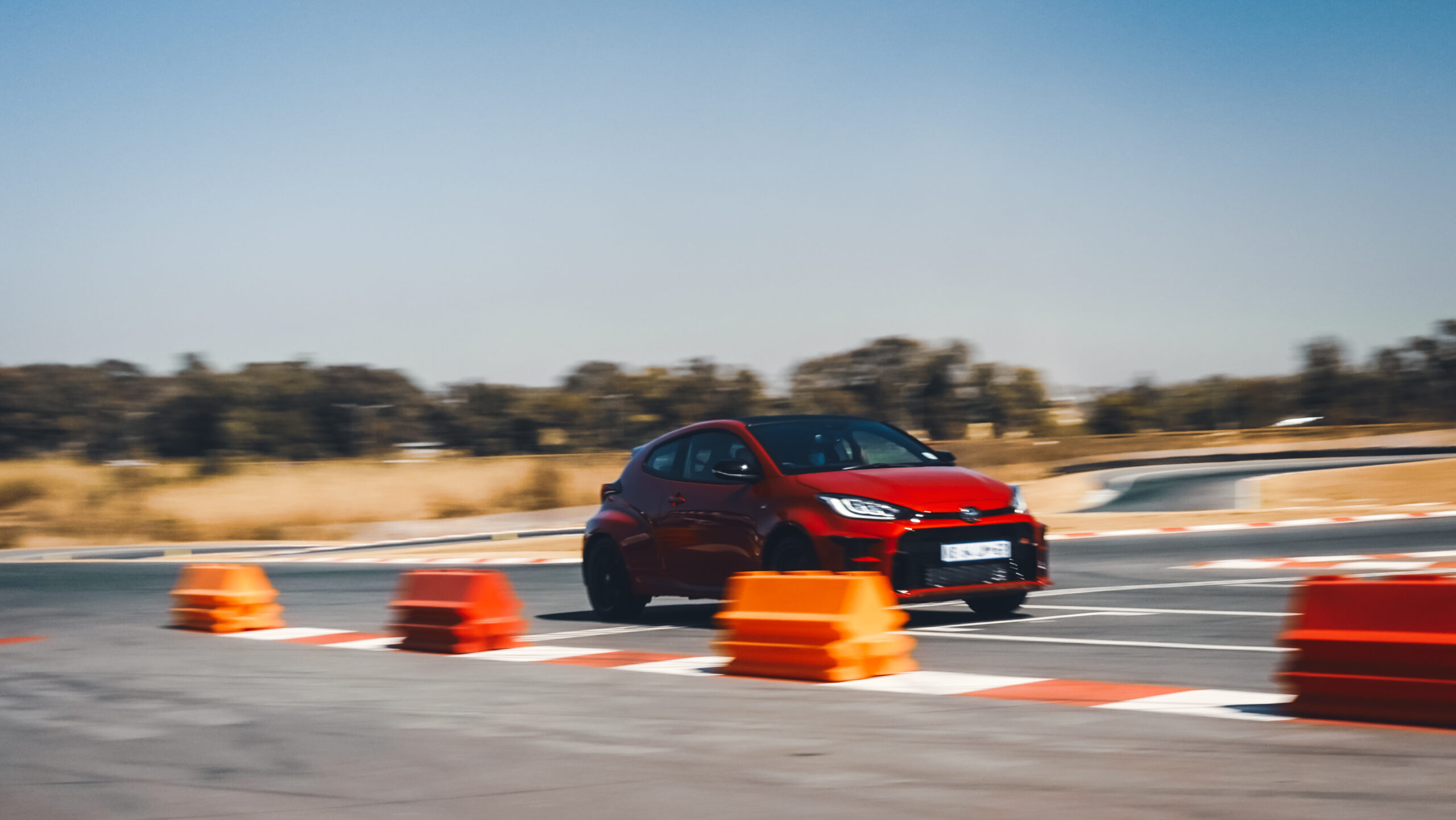 But first, say hello to the 6-speed manual ‘box paired with an AWD drivetrain, with a 198kW/360Nm 1.6 turbo engine equipping it with a 0-100km in 5.5 sec. Now consider that at 1280kg it possesses a stratospheric power to weight ratio of 0.155kw per kilo. You can thank a carbon fibre roof and lightweight aluminum bonnet for that, plus general use of light components in an attempt to create a Rally car for the road. Available in two shades of white, black or red. 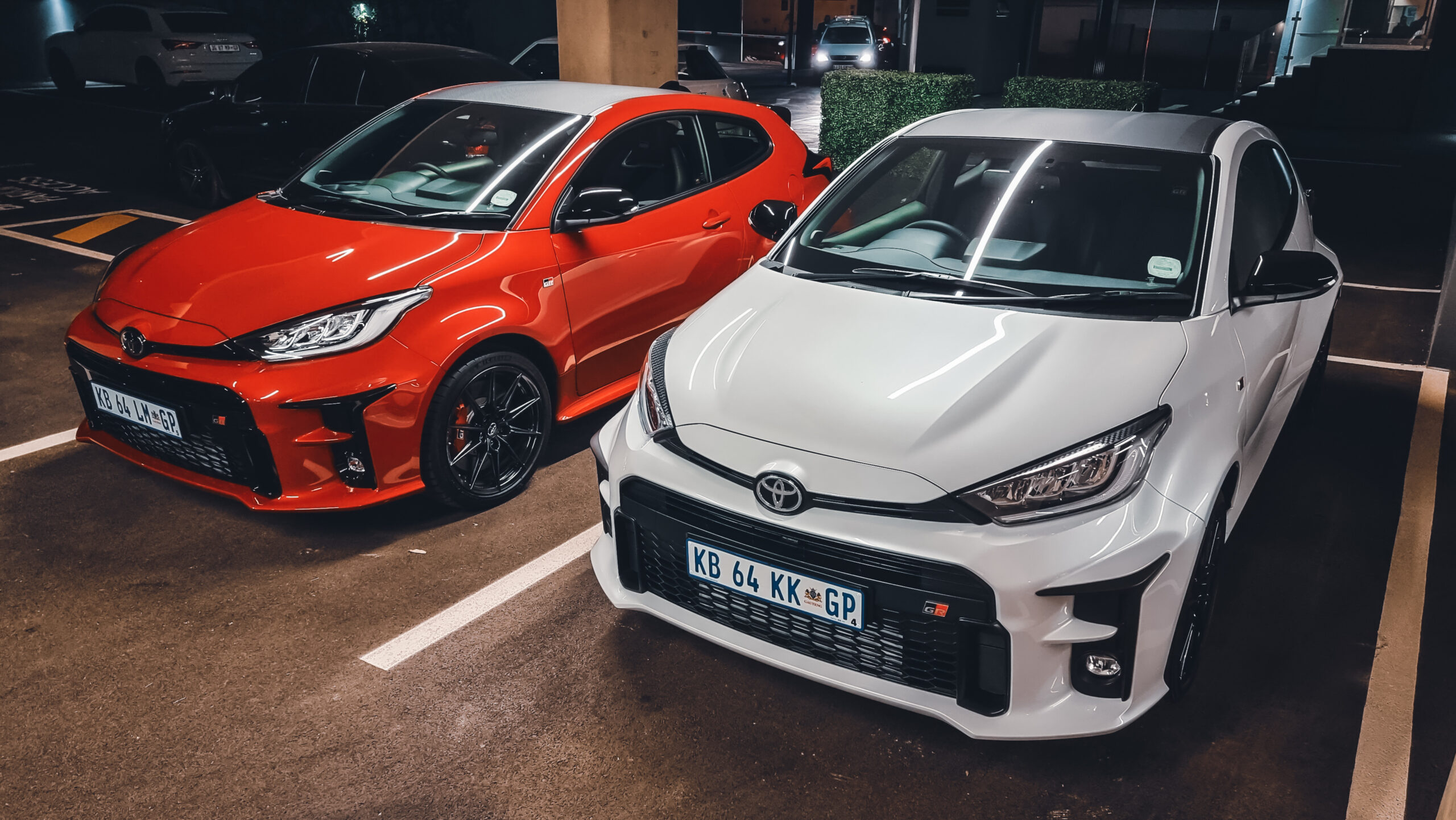 The end result is a car that betrays its 3 cylinder preconceptions with performance akin to a turbocharged 4-cylinder, but like, a really really good one. It’s fast, it makes the kinds of noises you’d like especially at the red line, punctuated with all the wastegate chatter you could hope for. Then there’s the way it changes direction, quickly and forgivingly allowing you to adjust your angle with the steering, the throttle and even the brakes. But there would be another opportunity to test its mettle because next up was. 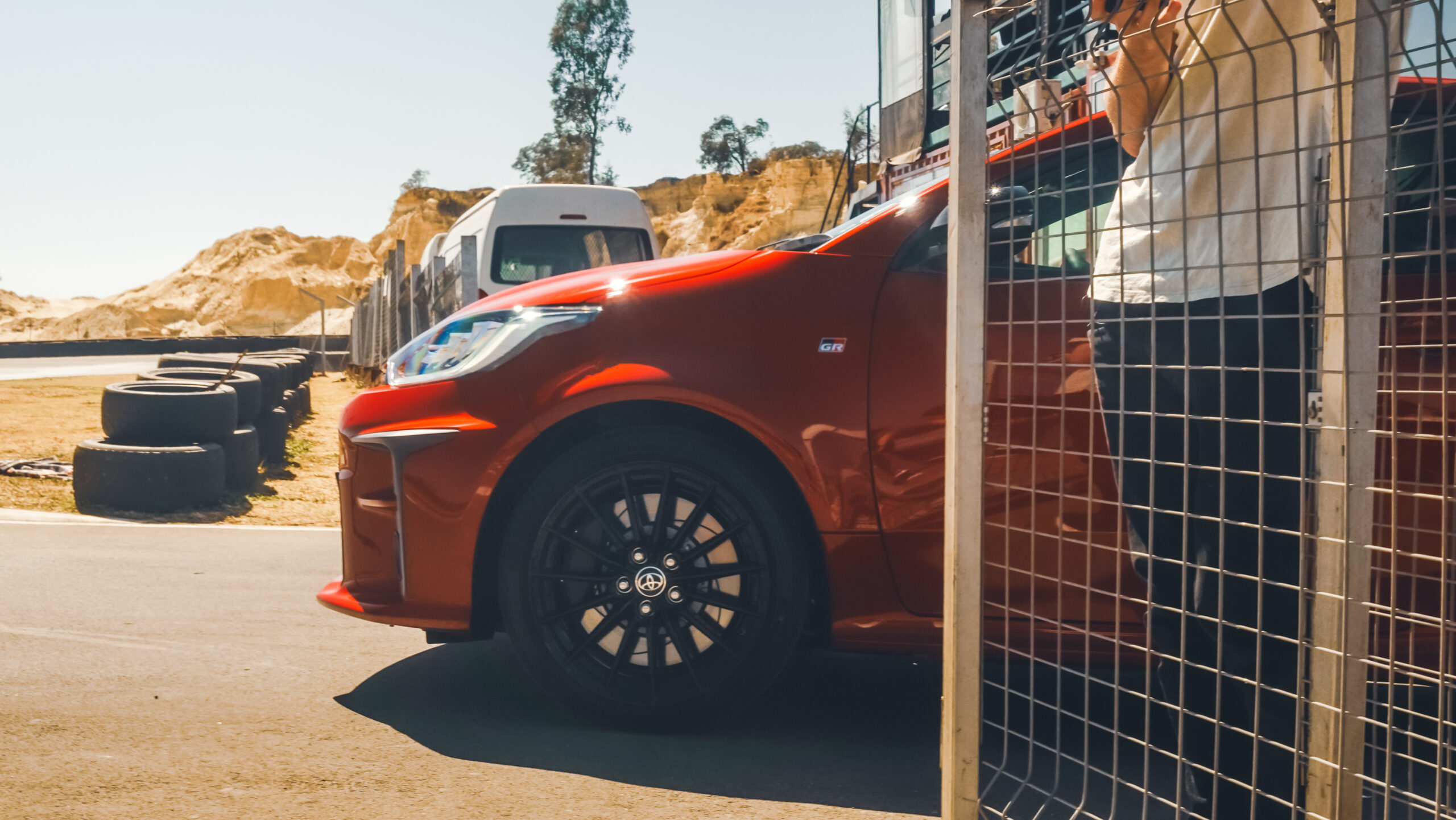 Part 2: Red Star Raceway
And yes, let’s just keep going. Here I got to spend a bit more time in third gear, and even visited fourth. We were moving now, thanks to the larger circuit’s higher speed thresholds. About that handling, those thick hips that I love so much are functional, serving up a wide rear track and even channeling airflow. This in combination with the GR-FOUR all-wheel-drive system, tuned McPherson front/trailing double wishbone rears make for a dynamic suspension that just wants to be driven hard. And I obliged as hard as I could and lived every moment of it. Until Giniel De Villiers showed me how it’s really done. 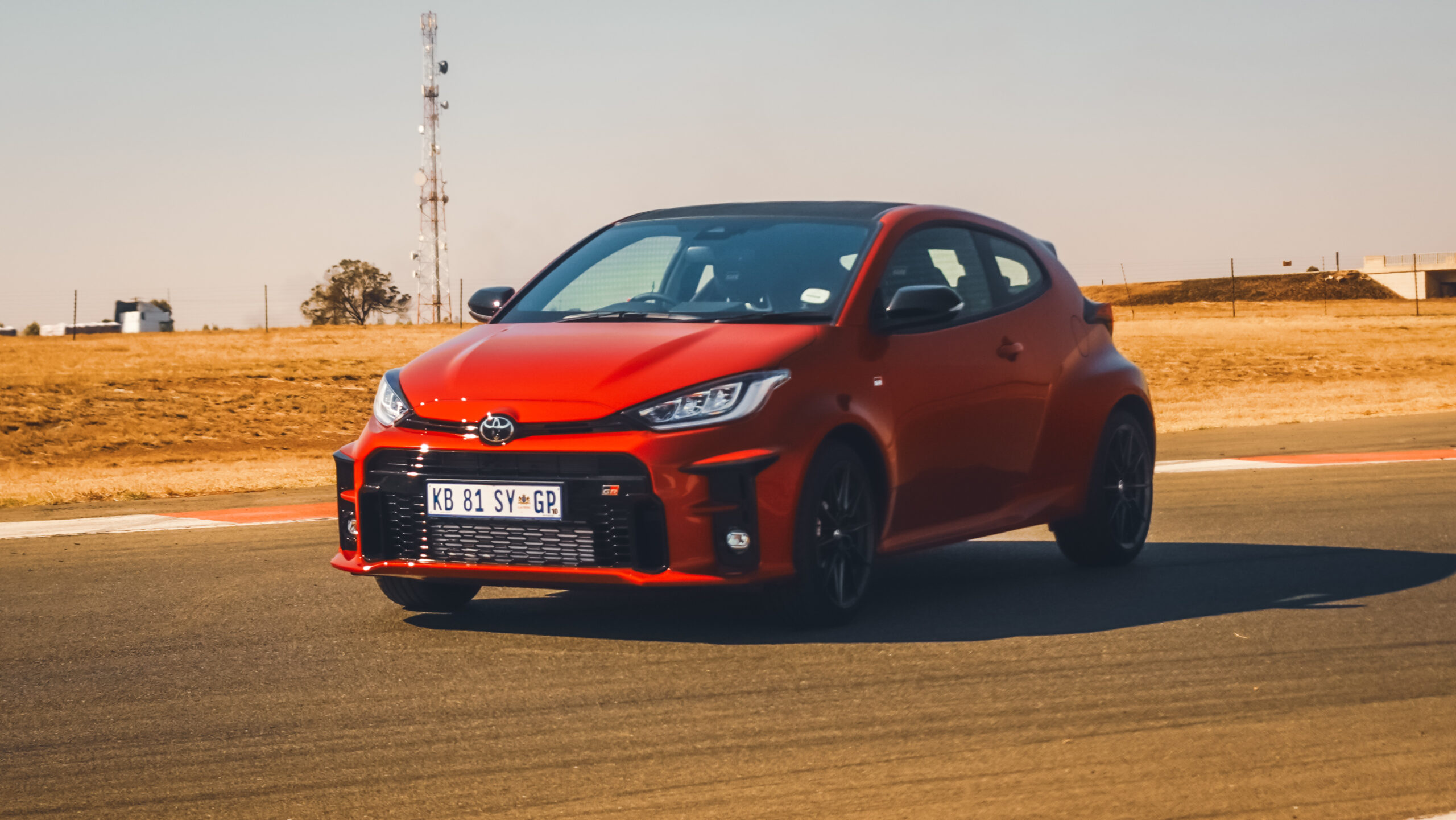 Part 3: after the party, it’s the afterparty
Before we left the track we were invited to jam on the skidpan, do some gymkhana runs and slaloms, and that was fun, but almost beneath the ability of such a special car. But I appreciated the fact that we weren’t meant to take the activities too seriously, so we’re happy about what came next. Unwinding and having dinner alongside some true greats. There was Serge Damseux’s Rally Conquest complete with massive wing. It sat alongside a red and black Tueno coupe, and the GRMN Yaris. In a separate display, the Celica GT-FOUR coupe of Rally legend sat beside a tastefully-styled Mk5 Supra. And we were invited to drive the Yaris rally car on a Kenya stage in WRC 9 on a PS4 Sim setup. What a great day. 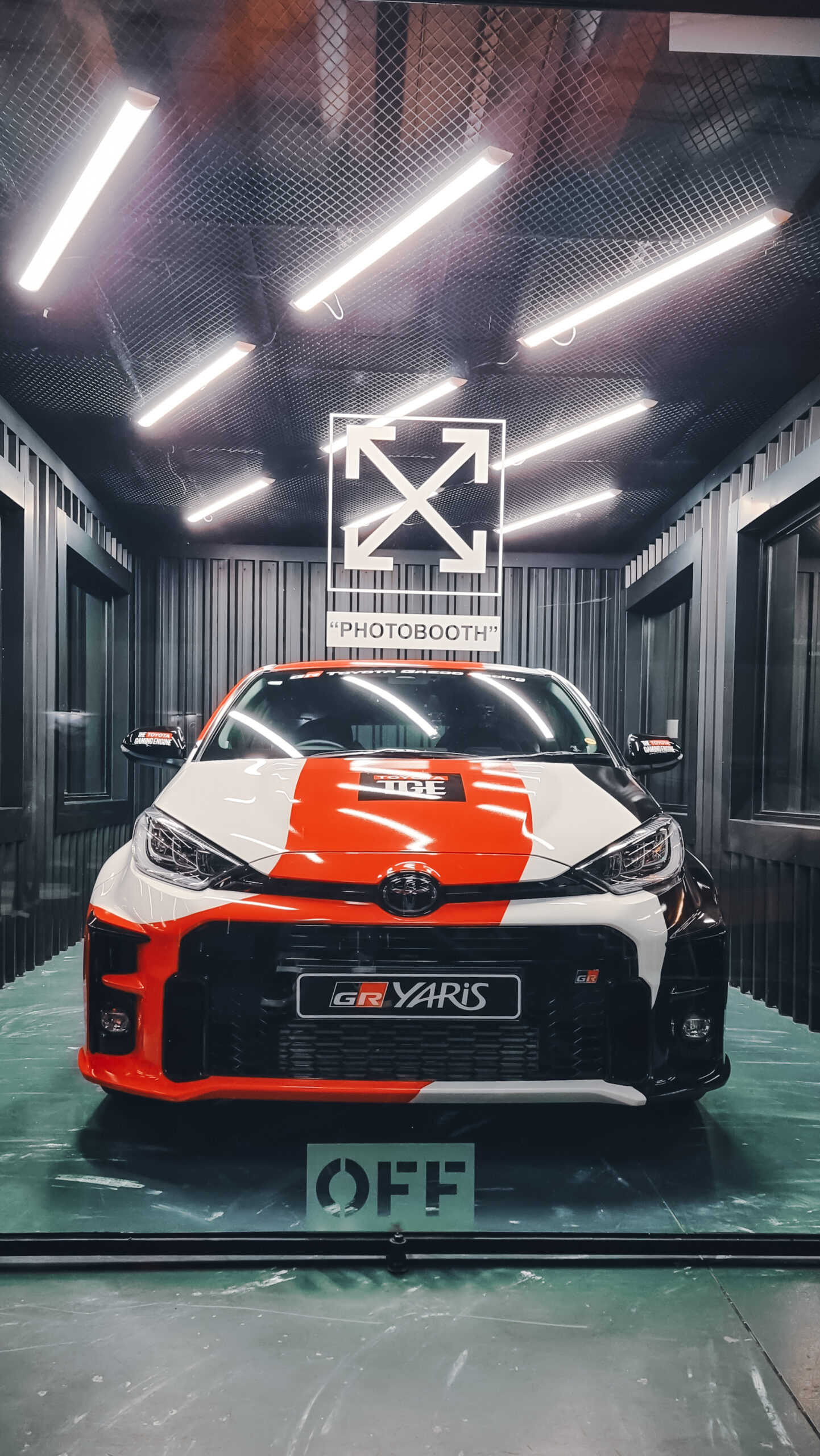 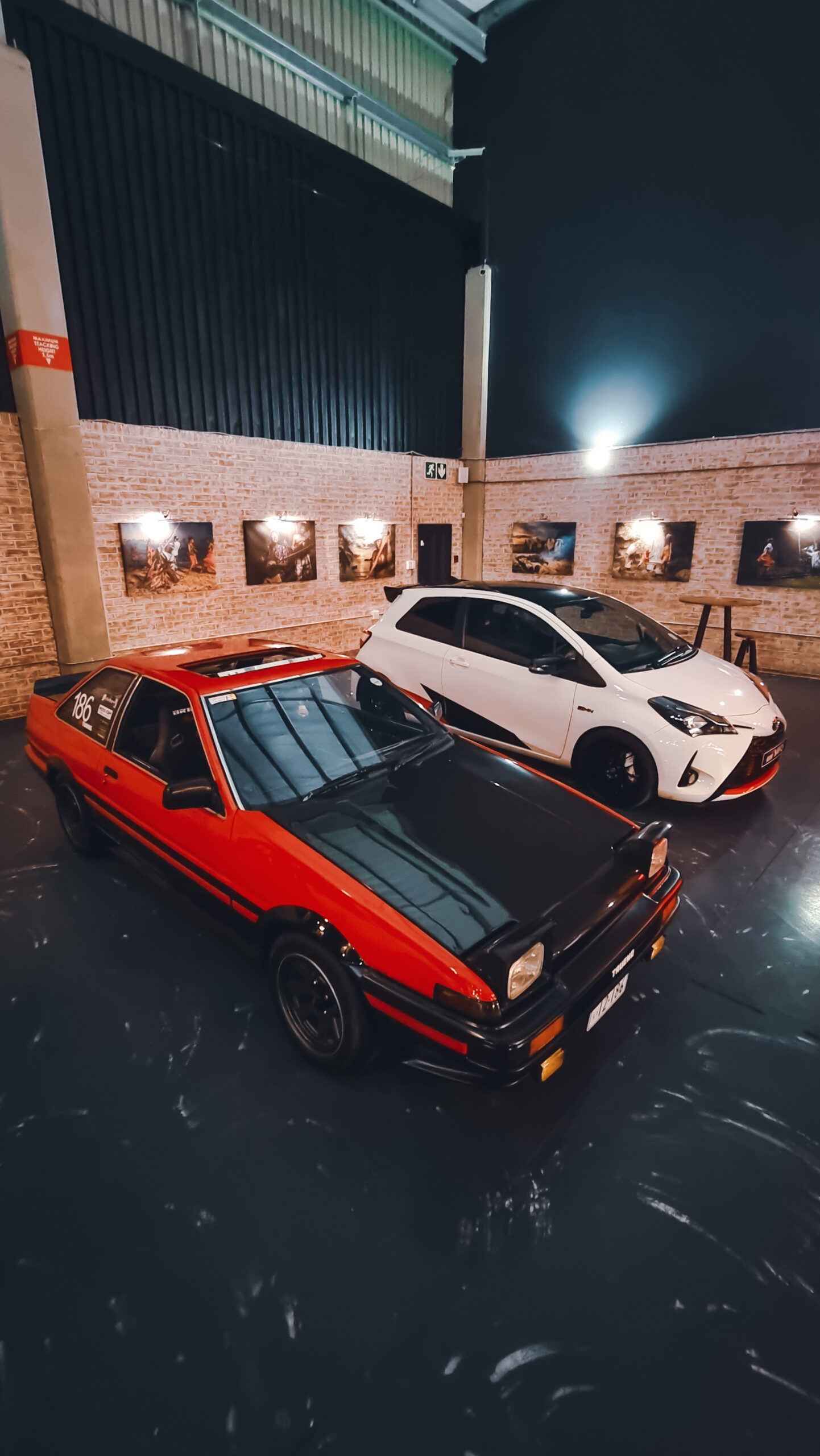 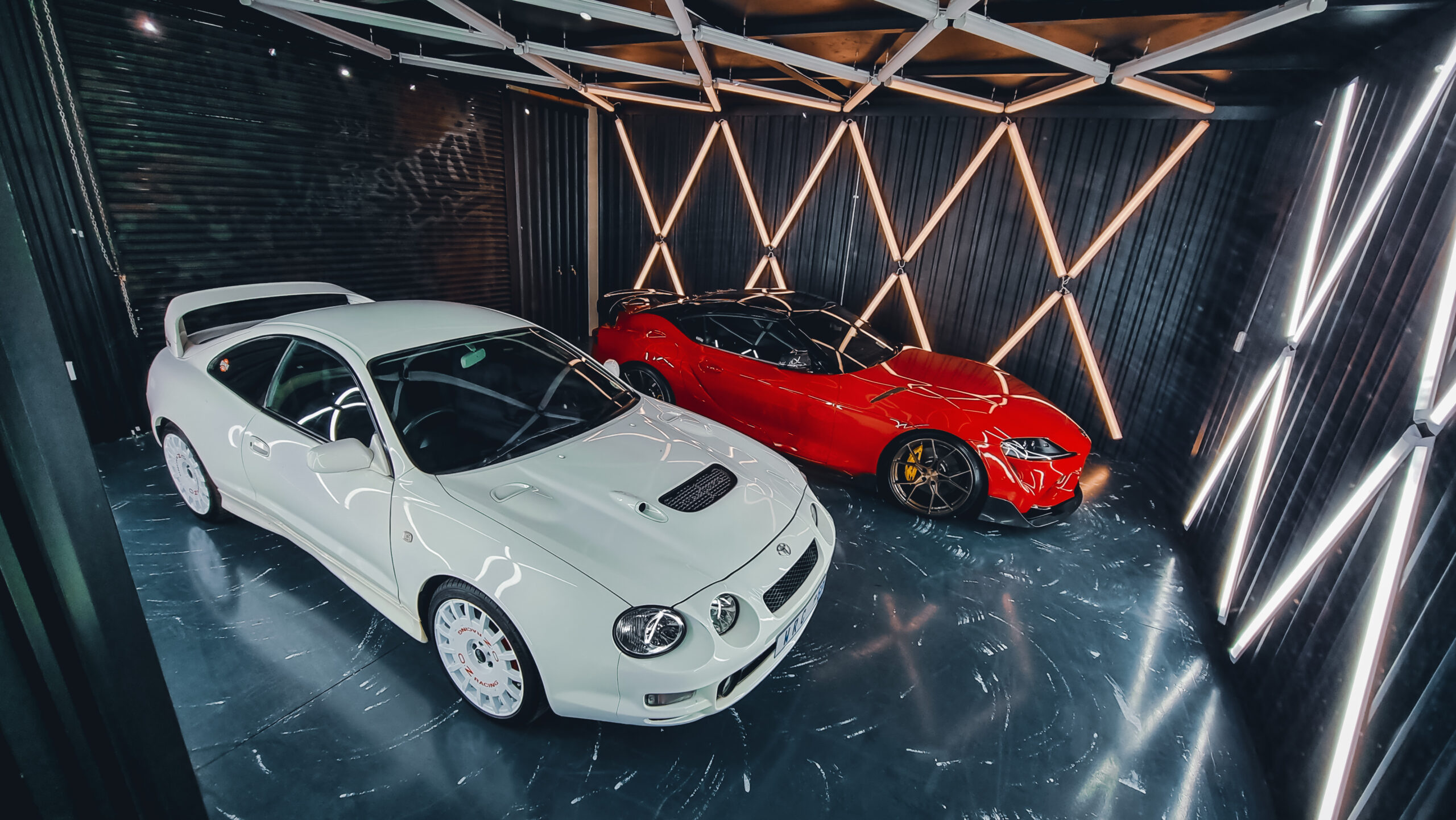 Part 4: let’s talk about what you get for your money
A turbo-charged 1.6l, that just happens to be the most powerful 3-cyl of its kind, in the world.
It features a close-ratio six-speed manual box at a time when rowing your own gears is almost extinct. This I feel, even more than the epic powertrain, will be its legacy. The brakes are excellent too, 4-pot all monoblocks upfront and 2 pots at the rear reigning in what is a very light car. Opt for the Rally version and it gets red calipers. Both versions feature a short-stroke brake pedal, but the Rally model enjoys stiffer springs and adaptive shocks, plus thicker roll bars. Both cars are equipped with lightweight, torsion-resistant seats, and the three pedals are shaped, sized, positioned and have the feel required by any heel-toe enthusiast. The cabin is clever, full of toys and connectivity, plus an info-packed TFT screen ahead of the steering wheel featuring amongst other things, an AWD indicator – which changes depending on which driving mode you’re in because well, that divides up the torque differently. 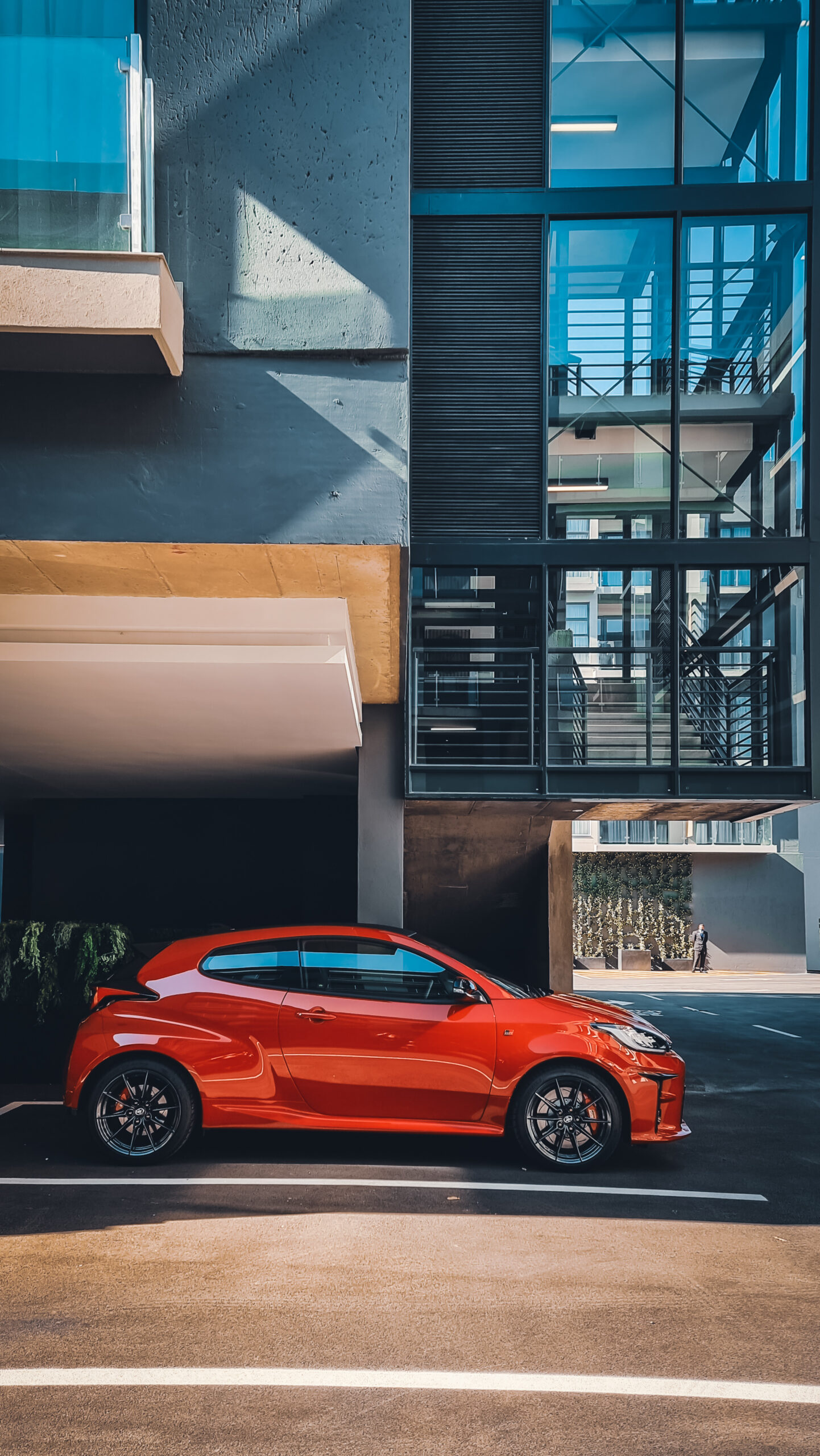 Other takeways? How about the fact that this is the first all-Toyota sports car that GR makes? And that this is the first rally-homologated WRX car since the Celica GT4. Yet, when faced with the pricing, R606 600 for the regular Yaris and R715 600 for the Rally version, people lost their minds. Because this is a mere Yaris? Except it’s not. It’s a Rally car for the road and for once the marketing is matched by its ability. As a quick example, the base GR is cheaper and quicker than the new GTI which we applauded for being priced well. And while the GTI is a masterpiece in its own right, and certainly the easier of the two to live with, the Yaris is intrinsically more special, albeit more work. Long hail the driver’s car. 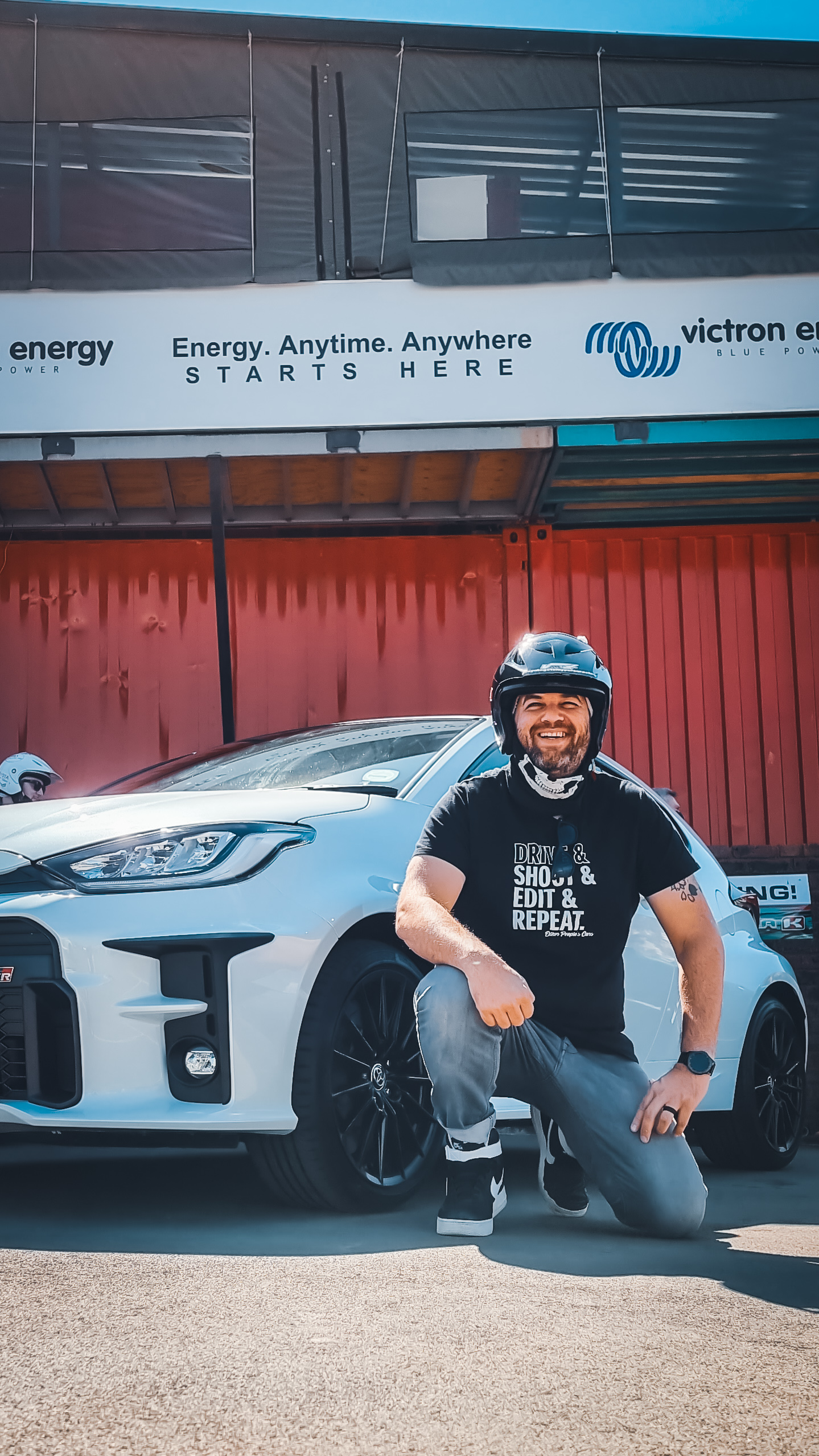 Oh and yes, there’ll be a video.