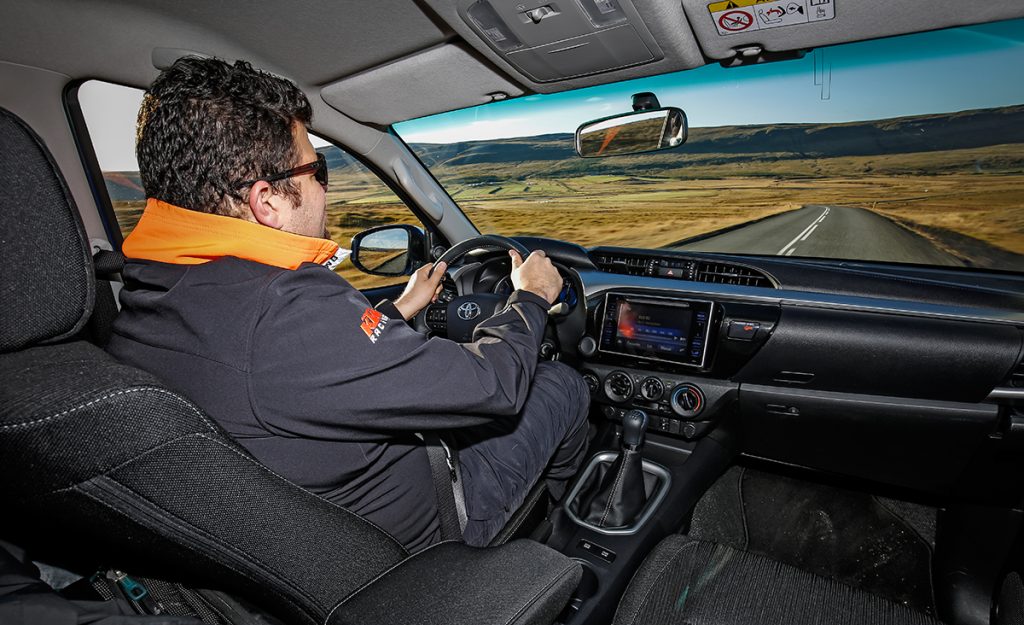 It was nearing the end of 2015 when I received an invitation to drive the new Toyota Hilux. In Iceland. A quick wardrobe upgrade at the local outdoor mart and I was ready to be folded into a shiny red double cab in the land where everything’s name features a 10:1 consonant to vowel ratio. Iceland, where I’d roll over everything from lava fields to river beds, hot springs to volcanic valleys in the 2.8 GD-6 4×4. I came back from that trip lusting for a long term relationship with a new Hilux and just four months later I had one on test. But that was 9 months ago, and now that it’s close to its return date, I can’t help but reflect on my hassle-free user experience.

THOSE LOOKS
The latest Hilux I’d argue looks exactly like it should. By that I mean reminiscent of its predecessor but bulked up sufficiently to take on its Yank rival, the Ranger and that Teutonic square-of-jaw VW Amarok. Here it fails somewhat, the jawline I mean, coming across as somewhat underendowed. I don’t mind it in the slightest, but it seems to be a common bugbear amongst critics, of which there are many in the suburb of Brackenfell where I reside. Apparently the bright blue paintwork on mine is also a bit too ‘lifestyle’, robbing it of some rugged kudos. Still, mine has the Raider embellishments and a 4×4 system that can take me almost anyplace, so stuff them.

INSIDE THE BELLY OF THE BLUE BEAST
Clamber aboard and what strikes you immediately is the car-centric nature of the cabin. It’s exactly how you’d imagine a 2017 Camry interior would look, well-appointed and for the first time sans lever for the drivetrain configurations. Instead you get 2H, 4H and 4L options via a rocker dial on the dash. It’s comfortable in here, and continues to be comfortable when you shift it into gear and partake in the urban commute. My only critism of the cabin is the lack of a volume knob for the entertainment system, forcing you to either tap the multimedia screen till you reach the required sound levels, or thumb at the steering wheel. I like neither of these options as much as the immediacy of twisting a knob. What’s so bad about a knob, guys?

FEEL THAT SHUNT
I’m going to be brutally upfront and honest with you. You don’t need the 2.8 GD-6. The 2.4 litre is more than up to the task of carrying you and your family and wares from Point A to Point B with zero fuss, thanks to copious amounts of torque in both diesel engines. With that said, the 2.8 is an absolute peach, and creamy smooth in comparison to its peers. Unfortunately it’s one of those catch ‘22 scenarios’ where rough is sometimes better in a vehicle meant to be macho. With that being said, I spent some time in the Trailblazer and a similarly engine Isuzu KB during the last few months and yes, I certainly see the charm in a more guttural, buzzy powertrain but I’ll side with the Hilux personally on this one.

AROUND THE BENDS
The new Hilux still handles like a tall-boy, leaning heavily around urban asphalt but lead it down a gravel path and it begins to make more sense. This is not meant to be a back to back comparison with its rivals, just my impression of the 2.8 GD-6 I lived with and I can honestly say it was a very happy union, never letting me down during our time together. All those places we ventured, some of them unwise – the Hilux was more than able of getting us back out of them.

VERDICT
If the price of the new Hilux scares you, it shouldn’t. Double cabs are luxury purchases in sunny SA and they all command a high price. Great ones like the Hilux do a great deal in justifying their worth, offering superb liveability and general ability. Mine hasn’t skipped a beat, even during its service period, a task which was carried out faultlessly. It was a great accomplice when we moved homes and often helped out during visits to the dump, or in acquiring new and ungainly bits of furniture, as well as a useful swallower of mountain bikes on the many occasion it was needed in this fashion. It will be missed very, very much.