Remember the Volkswagen T-Cross? It’s the newish compact SUV from Wolfsburg, Germany – seen here in metallic Takena turquoise. I say from Germany but I really mean Spain, at least that’s where it’s built. 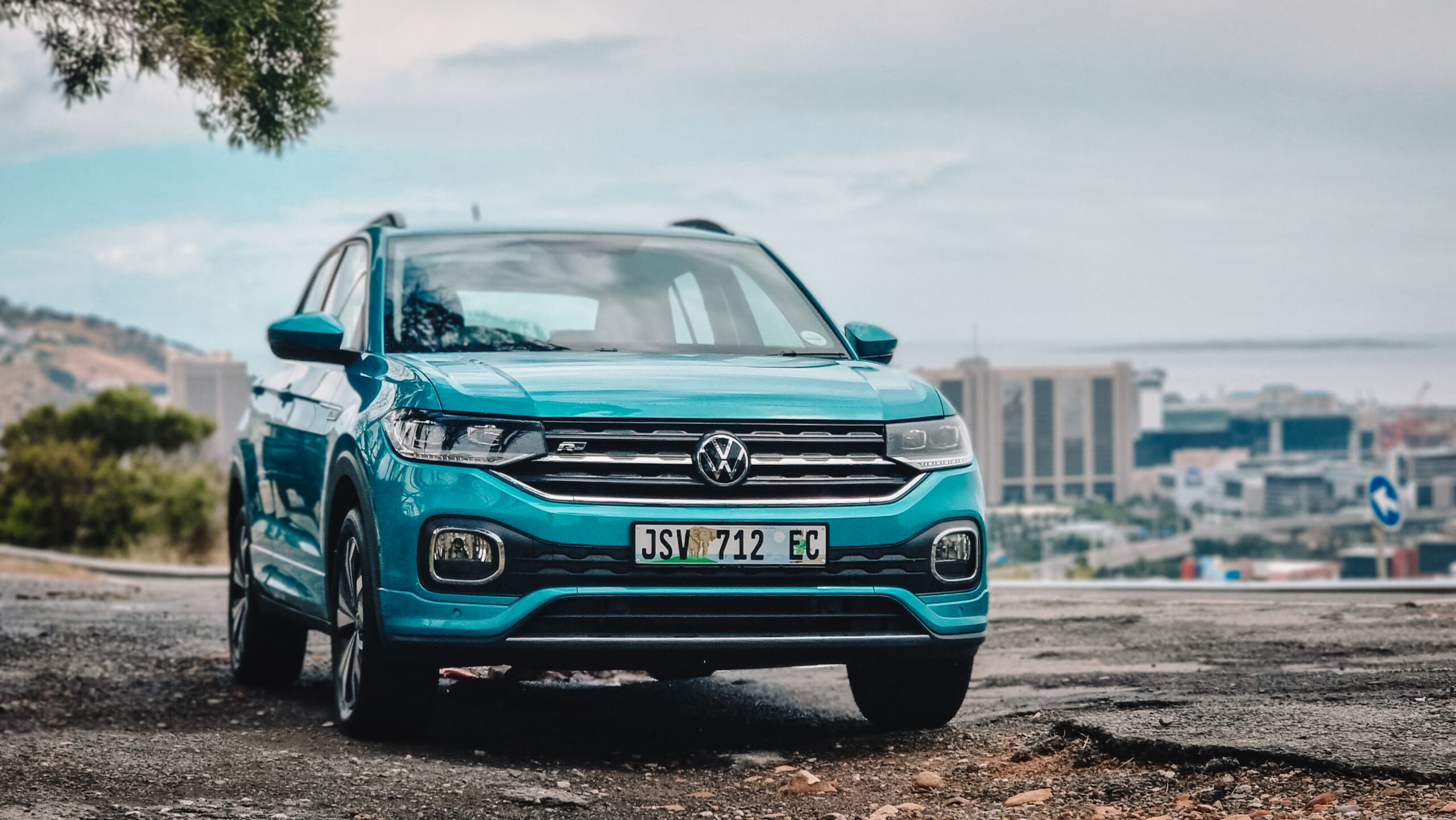 How compact is it? Well, very. About the same size as the Polo it’s based on but significantly taller, despite looking a lot like its larger siblings such as the Tiguan and Toaureg. This five-speed manual version has served as a refresher and a nice reminder on why, despite a segment overrun by Indian-built rivals, the T-Cross still stands out.

Think of it as a refinement of the concept of a Polo Cross. So, no longer derivative, now a very convincing standalone model. And you can add to that the fact that it was designed to compete in the most relevant segment of them all. What we have here is a chunky gravel traveler with a four square stance, purposeful looking sheet metal and tough 17 inch Manila alloys tucked into each gratuitous arch. Ours is a Comfortline model with the R-Line styling pack – yours for R357,900, but comes jam packed with features. Which I’ll get to in a moment but first – lets talk about what moves it. That is a minuscule one litre engine. With just three cylinders, the 1.0TSI engine good for 70kW and 175Nm, and comes mated to a five speed manual gearbox and can sprint from zero to hundred in 11.5 seconds. It will top out at 180kph and return an admirable 5.75/100km fuel consumption. So that’s pretty good. 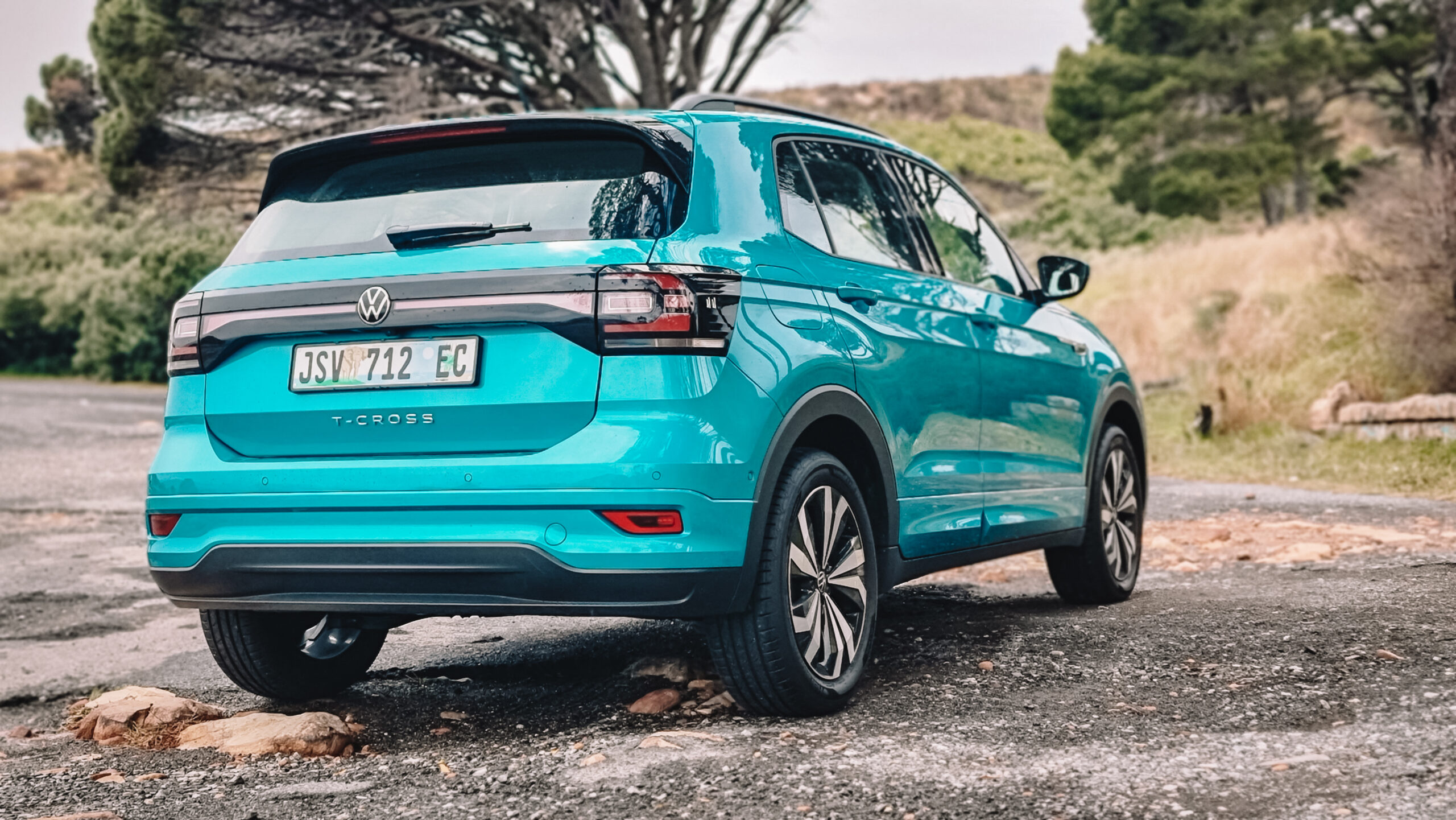 Right, those features. Well ours has keyless entry plus a raft of connectivity toys to better talk to your smartphone via the onboard Infotainment system. Also here, wireless charging, app-connect, voice controls and 3D map navigation. In addition to VW’s usual attention to safety ours is equipped with the park package – comprising park assist, a rear view camera and power-folding mirrors. It’s all very hand-holdy, isnt it? Not that I’m complaining.

The result is a cabin as well appointed, and comfortable I might add, as the exterior is convincing. If somewhat less exciting. More on that just now. Without even starting the engine, its easy to see why South Africans are flocking to the T-Cross. But, drive it we must.

Hop into the cabin and you’re dropping your bum into a comfy pew in what is a fairly sumptuous affair, one that pleases the driver as much as it does its occupants. The diamond pattern details carried through the interior, on the dash and the seats are a nice touch too. The window line is however a bit high so it makes you feel like you’re sitting quite low in the car, not a problem – merely an observation. The driving experience feels very familiar – smooth, direct and easy to get used to, like a marginally more adventurous Polo.

Perfectly car-like then, I mean why wouldn’t it be? The platform is VW’s MQB modular system and that means its road manners are impeccable. The helm delivers a robust amount of steering feedback and the chassis, whilst firm is in no way harsh.

Cabin noise in general is on the quiet side which is great for what is still a moderately small package. Chuck it around your favourite bends and look, it’s no race car – nor is it trying to be. No, this is built for compliance. Overall, this is a small vehicle with the attitude of a large one, but theres no escaping from the fact that under that turquoise bonnet beats a one litre, three cylider heart. And while VW have done an impressive job of giving it respectable outputs, you do feel the car’s limitations. Get over that mental hurdle however and you’re rewarded with a very competent city car that is perfectly at home playing in the dirt.

But here’s the thing, at just under R360k it isn’t exactly a bargain considering we now live in a world where a similarly sized Renault Kiger can be had for under R200k. But here you get creamy premiumness, that desirable VW moniker and let’s be honest – in Mzansi, that means a lot. Does it have what it takes to fend off attacks from the Kia Sonet, Toyota Urban Cruiser, Nissan Magnite and Suzuki Vitara Brezza? The people will decide.